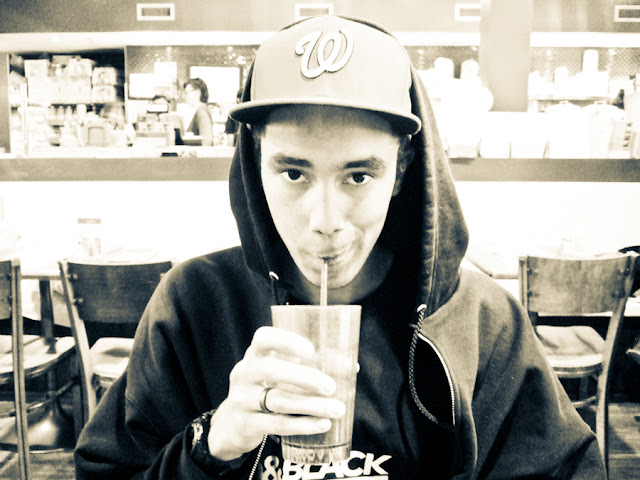 This is Joshua. He's 18 now, six foot three, very physically active, into music, skateboarding, camping and hanging out with friends, and... he's vegan. Yes, I initially chose this lifestyle for him, but he immediately embraced it and now I hear him preparing food in the kitchen with friends, answering their questions about why he makes pancakes with almond milk, or why he makes his chocolate pudding with avocados and raw cocoa. They are always amazed with the dishes he creates.

We don't make vegan food anymore, we just make food. It's not really something we think about because it comes so naturally after so many years. Similarly, people in Thailand don't call what they make Thai food, it's just people outside of Thailand that call it that.

I have been criticized in the past by a few people for "forcing" Josh to eat the way I do, but I'm his parent, and parents feed their kids meat, dairy, or whatever cultural food they were raised with. I happen to be vegan, but if he chooses to eat differently in the future, that will ultimately be up to him. However, given the facts about what the other side of vegan entails, and presented with awesome vegan alternatives, kids get it- there is absolutely no need to "force" this upon them.

As a teenager, I expected Josh to turn into a "junk food vegan" (you can call yourself a vegan even if all you eat is french fries, Oreos, Fruit Loops, potato chips and white bread every day).  He has been eating pancakes a lot lately, but he will not make them unless there are fresh fruit to go on top. And when he makes a sandwich or veggie burger he piles on loads of avocado, romaine lettuce, tomatoes and red peppers, so I'm pretty impressed.

All in all, I am extremely happy about my decision to raise Josh on a vegan diet. No parent is perfect- we all try our best, and want the most healthy and vibrant life for our kids :) It's up to us to shape the formative years of these little humans in our care... so let's grow vegans at home!

Thank you for this post! I recently made the decision to make my family vegan foods (mostly, we're still new at it) and I sometimes wonder if it's the right thing. After reading this, I feel confident my boys will be just fine!

I was introduced to your site by a new PBS friend and LOVE it! Beautiful site! The NIKE videos are fabulous!

I'm a 20+ year veg, 6 year vegan mom of a 15 year-old son. I raised him veg and then vegan and he happily ate my food and shared it with curious friends. Last year my son moved in with his carnivorous dad to start his first year of high school. I've been watching his health decline ever since his move. When he and I get together he eats vegan and wolfs down every bite but says he now likes meat. My ex (my sons dad) has Hep C and continues his poor diet while waiting for a liver transplant.

My son knows how to eat whole, healthy food and that's knowledge many kids don't have ~ Josh is a great poster kid for youth! We've given our kids the greatest gift a parent can give. . . the gift of health and compassion.

Josh is a doll! His choices have paid off in that he's obviously a healthy, thriving young man. Thanks to you both for sharing your stories.

Wow! What inspiration! Well, you laid the foundation of good, healthy habits, and he may go through a rough phase, but he will ultimately (most likely), turn back to what you have taught him. It's very difficult to have two parents who disagree on how to eat. It must be so frustrating, but don't despair- it will all work itself out :)
xo
Lyn