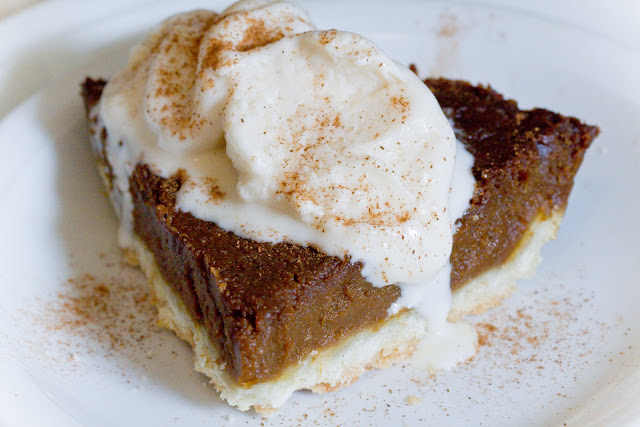 *Makes 2 large pies (But you can freeze the extra pie filling if you want to make the other pie later :)

1). Mix the flour and sea salt in a large bowl and with a fork, cut in the vegetable shortening until it looks pretty integrated.
2). Then add the Tablespoons of cold water one at a time and stir it until it looks ready enough to make into a loose ball of dough. Use your hands to mix the dough lightly together into a ball-
*you do NOT want to over knead it- this is pie crust- not bread dough. Leaving it rough will create flaky crusts instead of rock hard ones- I learned this the hard way...
3). Divide it into 3 clumps when you are done (each one of these will become a pie crust so if you are making just 2 large pies divide it into 2 clumps only.
4). Sprinkle flour down onto a flat surface like the counter or a table and, use a rolling pin (works best if it's also sprinkled with a thin layer of flour so it doesn't stick), roll out the first clump of dough until it is the approximate size of your pie plate.
5). Roll it loosely onto your rolling pin and carry it over to the pie plate, placing it inside. Press it lightly into the pie plate and trim a overhang. Pinch the top edge so it looks nice and repeat these instructions for the other crust(s).
6). Preheat the oven to 350 degrees and place the crusts on or near the middle rack for 10 minutes or so.
7). Remove them from the oven and pour in the pie ingredients after you have mixed it all together in a separate bowl. (just use your eye to divide the mix evenly).
8). Put the pies in the oven for about 1 hour (middle racks) on 350 degrees. It will rise up and look a little crazy, but then it falls and settles into what looks like the traditional awesome pumpkin pies your mom used to make. Let them set on a cooling rack or stovetop until they cool and top it with vegan vanilla ice cream of your choice and eat the whole thing! It's my favourite pie in the world :D xx
1 comment: