a penguin with real individual personality: what he's doing there i don't know...

The following was written by the very funny Vegan Feminist Agitator:

Check out her blog for more fun and amusement!

Another Disgruntled Alphabet for Vegans... 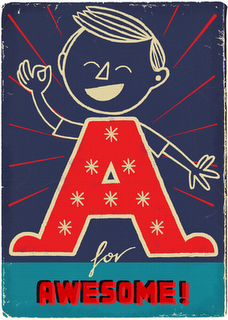 Last year I wrote my first Disgruntled Alphabet and because either the idea is so magnificent or my poor brain is turning dirty and crumbly like the snow outside my door, I’m going to resurrect this old chestnut and have another go at it. We can never run out of things to knit ourselves a lovely afghan of annoyance over to warm us on those lonely winter nights.

Like last year, this alphabet is for those days when you wouldn’t change being the awesome vegan ass-kicker you are for anything but you’re tired of the rest of the world, well, sucking so hard. This time of year, the things that irritate and plague us are particularly unpleasant, maybe because it’s all served up with the worst Christmas music etched onto our own brains like a record groove, invasive good tidings from people who couldn't care less about us the rest of the year, crass materialism and red and green junk everywhere. This Disgruntled Alphabet is for days when you just want to curl up in a peevish little ball of dirty looks and judgment and let the stupid year just end already. Make yourself a mug of hot chocolate (extra bitter!), put on your comfiest socks, wrap yourself in your personal afghan of annoyance and enjoy. Last year, my Disgruntled Alphabet had some bright spots interspersed: this year, I'm serving it straight up. You can take it, soldier. We'll get back to the warm fuzzies soon enough.

A is for the predictable but no less Antagonizing way in which your family (or co-workers) think that you can and should just “eat around” the meat.

B is for Buzz-kill, the way you feel when you’re reading the list of ingredients on that fabulous looking chocolate bar or bag of salt-and-vinegar chips when you come upon whey as the second-to-last ingredient.

C is for Caustic, because sometimes you feel like your head might explode if you cannot release the pressure with a caustic aside, like, “Oh, yes. I can certainly understand why you think that tofu is disgusting when you eat animal corpses, mammary secretions and ovum regularly. That makes perfect sense.”

D is for Damn right, I eat plain nutritional yeast straight out of the bag. What of it? Like you don’t have any bizarre habits, freaker.

E is for Eating. Just let us eat in peace. Aren't we supposed to be the annoying and judgmental ones?

F is for Finally, as in I looked through a veritable mountain of winter coats and I finally found one without fur trim or wool and it's not even that hideously ugly.

G is for Gross, as in Gross! What is that at the bottom of my produce drawer? Is that from freaking last summer? Can I just buy a replacement drawer?

H is for Hegan and any other silly media catchphrases that get some attention for about two weeks before being tossed into the dung pile until Larry King half-heartedly resurrects it for five seconds before it is finally, inescapably retired.

J is for Just kidding, as in, “I think it’s awesome that you think you’re rebelling against the status quo by eating bacon like just about every other shmuck on earth. Just kidding!”

K is for Kale because, damn, sometimes you feel so broken down by the world you want to curl up in a ball but you should really try a vitamin infusion from this heavyweight of the produce world instead. Or fine, curl up in a ball instead. Like a gallstone, it'll pass.

L is for Listening, which we are forced to patiently do, while nodding on top of that, as people explain that they're not eating all that much red meat anymore.

M is for Michael Pollan and the zombie-like band of self-important meat fetishists that he helped to spawn. Thanks, Michael. The world wasn't heartbreaking enough before artisan, slow-roasted suckling pig was on every foodie's wish list.

N is for New Year's Resolution, in which you intend to be less bothered by the world, and it works pretty well until January third or so.

O is for the Orange wool scarf you got for Christmas and you need to try to exchange this year without a receipt. O is also for limiting the Occasions that will come up for your sister-in-law to see you in the winter without it.

P is for Prissy. You are not prissy! You are Principled and Perhaps Perfectionistic and occasionally Persnickety but you are not Prissy. Oh, so what if you are?

Q is for Questions: do you get enough protein? Are your shoes leather? What about the homeless? Did you hear that tofu will make your son start menstruating out of his nipples: I read this in a very reliable study funded by the Weston A. Price Foundation...

R is for, "Really? Are you sure about that?"

S is for Sanctimonious, which, apparently, you automatically are if you have convictions.

U is for Unpleasant. Sometimes it just is.

V is for Vegan, long 'e', hard 'g.' No, Mom, not veggin. How long have we been working on this? No, not vaygun! Never vaygun. I am not clenching my teeth. VEGAN. Vegan. Yes, I'm sure that's how it's pronounced.

W is for Why does everyone think that you are suddenly and single-handedly responsible for creating a solution for every hardship or injustice in the world, natural or man-made, just because you're vegan? How is this fair or rational?

X is for Xylophone. What does a xylophone have to do with veganism? Well, what does the claim that your neighbor's sister's daughter's best friend was allegedly vegan for a week and her skin turned bright green and then she died of aneurism have to do with it, or the fact that while being one you still can't suddenly and single-handedly cure every injustice in the world, or the PETA recently did something embarrassing and stupid that was on the news, or the fact that Drew Barrymore is no longer one have to do with it? So, yes, xylophone.

Z is for Zingers, because even the most dour, humorless vegan in the world has built up a reservoir of plenty of these over the years. It just happens.
2 comments: 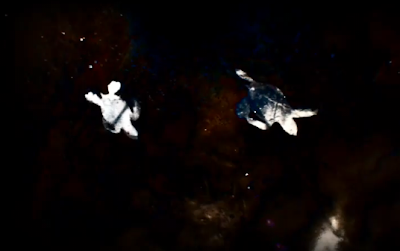 This is the most lovely documentary about sea turtles that our friend David Breckenridge made. You can watch it in fine quality below, as he has asked everyone to spread the word about the plight of these beautiful creatures.

Becoming Myth is filled with breathtaking footage that is put together and narrated in such a way as I have never seen before- I love it. Go to David's Youtube chanel to see more of his projects. Enjoy :)