Cattle transport truck overturned near Toronto: We had the misfortune of seeing it 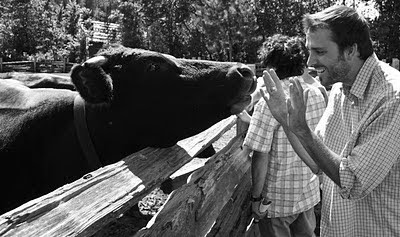 Good morning friends from different corners of the Earth :) It's 5am and I can't sleep because of something I saw yesterday, so I need to tell someone. James and I were driving on the highway with a friend to go hiking in our favourite forest (the one with the waterfall I have mentioned before), when we saw a massive animal transport truck in front of us filled with cows. On a normally day this would send a wave of empathy and sadness through me, but the truck literally overturned 30 seconds in front of us and what we saw was something out of a horror movie.

The lovely animals were 'screaming' and writhing as they were crushed, making the most horrible noise imaginable. I couldn't stop crying, and I felt like I was going to throw up. We had James' camera in the car, but could not bring ourselves to document the scene. Instead of helping the animals, the driver of the truck, who was fine, stood there staring at them. It took 7 1/2 hours to open the highway up again after the initial accident.

They tried to flip the whole damned truck without removing the trapped cows who already had broken bones, and almost 20 of them were killed. I guess the monsters in charge of the mess thought 'Well, they're going to be killed anyway, so what's a little more torture? Let's upright the truck and we won't have so much work to do'. But when the roof stated tearing apart they decided to call in another truck to transfer them. They were young cows being taken to another facility so the injured ones are being treated, only to be slaughtered when they grow bigger.

It was just a couple of weeks ago when a pig transport truck with 200 animals flipped over, killing 81 of them, while the rest spilled out onto the highway squealing, before recapture, only to be brought to a slaughter house. 200 pigs in one truck?? What the hell?

I can't sleep. I just can't get the images and the sounds out of my head. How can someone look at cows or pigs or chickens and think they don't feel pain? Genuine pain. I can tell you for certain that the sounds I was hearing were cries of unmeasured suffering. And what for? So someone can satisfy a craving for steak? Can we not control ourselves and gain a higher taste?

I really need to sleep. I put up a photograph of James and a healthy cow in Thunder Bay, in place of an image that would have made any compassionate person weep. Please, for the love of god, consider a vegan diet if you're not vegan already. I love you all, and hope that you are spreading your consciousness wherever you go. Good night :)

I certainly can understand your pain with those poor cows.

When I come in to Toronto from Mississauga, I always have great difficulty when a transport, carrying those poor animals, passes me. I say "please go with out pain".

My Mother's family were "Butchers". My Great Grandfather, my Grandfather and my uncle all owned their own "slaughter houses"!!

I would NEVER want to visit their homes. I remember once when I was about 4 or 5, my parents dropped me off at my Grandfathers in Sarnia while they went to Port Huron for a weekend.

IT WAS KILLING DAY

I heard the screams of the pigs being killed. I ran in the cornfield as far away as I could but I still heard their sounds. I started CRYING. After everything was over, I went back home. My grandmother asked me what was wrong? I told her I was crying because I missed my parents. She knew why I was crying. She told me she also HATED those sounds and took me in to the city!! I CRIED and CRIED until my parents came back.

To this day, I hear those sounds, I feel their pain and I see through their eyes the last things they saw.

My empathy for all living things is based on my past life and my present experiences. This is why when I see anything in distress - Human - Animal - Insect - I feel their pain and I see through their eyes.

When I see a fly caught in a web, I want to help! I feel it's pain - I see the spider coming. But I understand the survival.

When I see someone or something causing unnecessary pain to anything living, I WILL LOOK AND I WILL TRY TO STOP IT!!

Some people consider my extreme empathy a weakness. NOT ME, this is MY STRENGTH!!