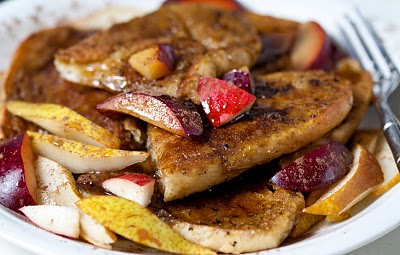 Okay people, I know this is definitely not raw, but Josh and I were craving something this morning and came up with a new recipe for french toast. It's not something you are going to want to have every day (we're really full right now), but once in a while won't kill you. Here is the easy recipe:

Heat up a pan (cast iron is my favourite), add vegan butter or margarine, dip your *french bread in the batter to cover the whole thing for only a few seconds, and... fry it in the pan for a couple of minutes until it gets golden brown on each side. This recipe only makes enough for two people, so double it if you are feeding more folks!

Cut up fruit like pears, plums and bananas to bring at least something raw to the table and balance out the rich flavours. Then drizzle real maple syrup (do not use that fake crapola or you'll ruin this treat and I'll be very disappointed in you!) over the whole thing and sprinkle a bit more allspice. Love it!

*(from a bakery it's usually vegan by default because they make it every day and therefor don't need to add mono and diglycerides like store-bought breads). Cut the baguette bread in half like you were going to make a sub, and then you can choose to cut those halves into whatever lengths you like, otherwise you will have only tiny little french bread pieces (but maybe that's okay too).

I tried it and I thought it was pretty good! I added more cinnamon though. :)