A Question: Do you know what a vegan is? Pretty funny video and a not so funny picture:: 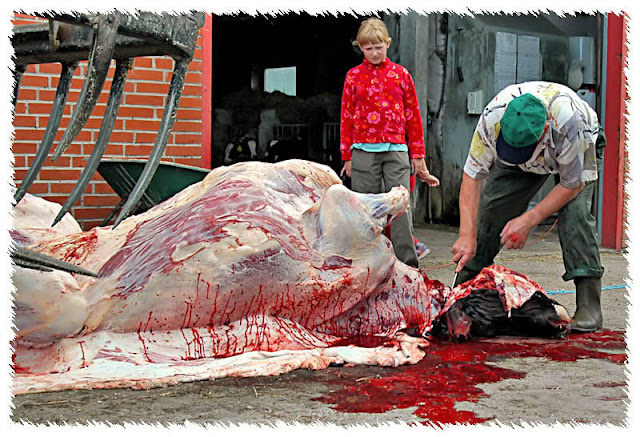 Well... I found this photo of a man slaughtering a cow in front of what I imagine is his daughter, and it's not usually the kind of thing I post, but it was so striking to me. Most people do not want to think about what they are eating, or that their choices cause pain and suffering to others. This is not an abnormal or more cruel image of how a cow is killed and prepared for consumption, but meat eaters would find this offensive and most would not want to show their children. I was certainly not shown photos like this when I was young, and that's not a dig at my parents, but if I had I would have become vegan a lot earlier.

I remember when I was teaching a private art lesson to a kid Joshua's age (10 years old), in our home, and during the class Josh started preparing some veggie burgers on the stove. The kid asked Josh what he was making and he replied 'veggie burgers'. The kid asked him what a veggie burger was and Josh answered 'You know- a burger that doesn't have dead cows or pigs in it like regular hamburgers do'. The kid got this horrible look on his face and turned to his mother as if he was asking if he was telling the truth. She glared at me and I realized that this kid had no idea where hamburgers came from. I was shocked, but changed the subject quickly before I lost my student.

I say if you're going to feed your kids meat show them what it really is (why not take them to a slaughter house?), and then give them a delicious alternative. I guarantee you they'll make different choices.