Mass animal sacrifice begins in Hindu festival in Nepal; 200,000 animals to be killed 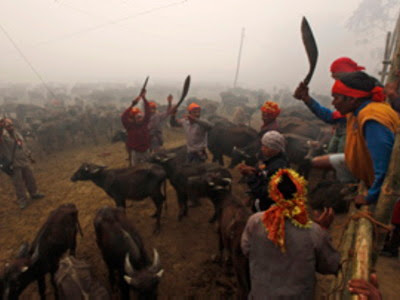 We couldn't believe what we were reading in The Metro News Paper yesterday- I had no idea about this "festival" where 200,000 animals like pigs and buffalo are hacked to death with machetes in a massive slaughter. Did you? Hindus? Really? Hindus are vegetarian right? That's what I thought too, but after they kill the animals they have a big feast where they eat them.

So it doesn't really matter if they are vegetarian for the entire year because about 200,000 people show up to this event, which means that each person is responsible for the death of one whole animal - probably more than some meat eaters would consume in a year.

The image is horrifying. There is a less public mass slaughter going on every day in the world- it's called factory farming. The images are equally horrific, but they are hidden from the public view and people all over the planet pick up the remains at supermarkets, wrapped in neat little cellophane and styrophoam packages.
Click here for the full article.

As a Hindu, I can tell you that this is far more barbaric than even the disgusting factory farming. At least factory farming is largely confined to domesticated farm animals such as cows and chickens. This slaughter that you see here is nothing. Go further south into Calcutta and over to Bali and you will see a truly horrifying sight. The street markets and temples are filled with the brutally slaughtered carcasses of critically endangered sea-turtles. I kid you not. Over 100,000 turtles are killed every year by these so-called Hindus. Our family and my parents' hometowns never sacrificed animals during the holidays.

Not all Hindus are vegetarians, that is a myth. I personally eat chicken and turkey. But it would have especially been considered blasphemous to do so during the holidays or to bring meat anywhere near a temple. But apparently not for a majority.