Deer in the city of Toronto: 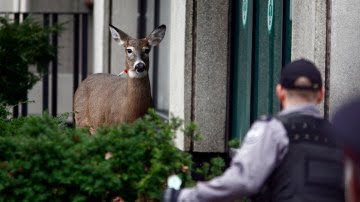 Well it's been quite a week here in Toronto. I arrived to the office of my physiotherapist only to find the entire building blocked off by police, several camera crews and about a hundred people. I asked someone what the hell was going on and he said "There's a deer over there". A live deer in the city? Yup- there she was, beautiful. How very sad that we never get to see wildlife because we've covered every square foot with concrete. She seemed very tired and just lay there for the longest time. I went to my appointment, which was an hour long, and when I emerged from the building she was still there. Why was it taking so long for the animal rescue people to do anything? They were enjoying the press too much.

I watched with the others as police in bullet-proof vests (you never know right?), stood around with nets, and then a man with a long tranquilizer gun got into position for a shot. It was horrible to see what happened next. When the deer was hit she jumped up immediately and tried to run in every direction, but there were people everywhere. She jumped the police tape (great blockade guys), and landed on the wet pavement only to slip and fall directly onto the red dart that was sticking out of her. The needle must have broken off for sure and it looked so painful. The police and animal control moved in with the nets and the I saw them TASER her! I kid you not. This lovely creature convulsed violently for a long moment and then went limp.

Tasered? Really? Now that's caring about animals. The thing already couldn't walk. It slipped because it's hind legs went numb from the tranquilizer, and they already had nets around it on the ground. Of all the places in this city I could have been and at all the times... why did this incident happen in exactly where I was headed that morning? It really made me think about what we're doing as a species. We spread out like a parasite and destroy everything in our path only to create artificial impressions of nature- we choose the wildlife that is acceptable (our pets), The vegetation that is tolerable (our flower gardens), and pave the roads so we don't get mud on ourselves or our cars. Time to move out of the city. *This photo was taken from The Globe and Mail Toronto website because I didn't have my camera on me at the time.